Great service, I got my insurance in seconds after purchasing it... I'm definitely going to purchase a new one from Caremed if needed. Thank you.

COVID-19 cover | CareMed insurance plans. Everything you need to know about the coronavirus. Read more.

My stay in the French capital, Internationality, Architecture, Arts and Culture

It was incredible! I just couldn‘t believe it! I had handed in my application at university Paris-Sorbonne; however I had not received any confirmation of acceptance yet. My professors at the Cologne University had been so kind to write recommendation letters for me and as naive as I was, I imagined the Sorbonne would open its doors wide and roll out the red carpet for me…

My friend Anna who accepted an assistant position at Lycée Henri IV called me every night in order to motivate me not to give up. Enthusiastically, she told me about her 20 m2 small room that she rented in 14th arrondissement. Astonished that she was so happy about such a tiny as well as modest accommodation, I started to convince myself that an adventure in the French capital city was not needed anymore while I was enjoying my flat in the south of Cologne, close to the university.

Then, end of September, when I tried to let go of my study abroad project, the letter of admission arrived requiring that I register myself at the Sorbonne within the next 8 days.

From one day to the other, everything changed and my level of excitement increased with the hectic rhythm of preparations. Find a subtenant for my flat in Cologne, accepting to move out 12 months later when I return. The list of “to dos” was long… Find an applicable travel health and accident insurance for my stay abroad, maybe also third party liability insurance… In the end, all these things I hadn’t thought about before. Luckily, the Sorbonne had sent me a list of documents that I needed for registration. And my friend pointed me to CareMed travel insurance that she had taken out for her internship in Singapore. The travel insurance provider was specialized in exchange and educational programs abroad.

Friends from all around the world

Finally, I was very lucky to get a room in a big apartment where I lived together with Pedro from Rio de Janeiro, Marta from Lausanne and Nina from Malmö. This international trio welcomed me with open arms and couldn’t wait that I told stories about “my” Germany. 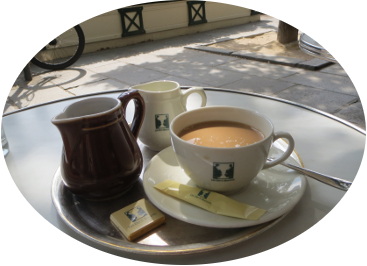 Living together, we all respected the rule to speak only French, with the exception of phone calls with parents or friends from home. Of course sometimes we made a bit fun about the interesting individual accents and imitated each other. We really could not stop laughing! I was lucky to live in the Quartier Latin, so I could reach the Sorbonne in just a couple of minutes walking and go jogging in the Parque du Luxembourg where depending on the time at the day, it smelled like roses or cotton candy. Sometime one of us, still wearing slippers, went to the bakery in the ground floor of our apartment building to supplying us with delicious croissants and chocolate rolls. Together we drank our Café Crème and „à la française“ we dipped the butter croissant in it before going to the university. I still have the taste on my tongue.

We were a great team with a lot of humor. I could always count on one or the other when it came to watching a movie at the cinema, visiting a vernissage, a conference or simply spending an evening with some friends.  Sometimes, Anna joined us and respected also the same rule… no German, Molière’s language was on the agenda. Influenced by our German education, we feel being easy, to integrate the roman language in our lives that were already colored blue-white-red and we were proud of it.

My Life at the Campus

The Sorbonne, one of the oldest universities in France, and the Excellence of the French National Education. A dream…until I realized that I wasn’t just there to discover the culture as a tourist, I had also to study! Indeed, I had signed up for literature and civilization studies and there was a lot to do. Just hoping to leave the Sorbonne with certificates and the respective credits was sufficient to make me give everything. Never before I had been so motivated and I used this energy to research for my bachelor thesis that I had to work on when I came back to Cologne.

Simply the historical buildings that hosted administration and lecture rooms at the Sorbonne, fascinated me. On my bench seat I imagined that already Academics and famous demonstrators of May 1968 had sat there, such as Renaud, Daniel Cohn-Bendit or Jean-Paul Sartre.

Registered for language studies, I practiced translation from French to German and vice versa. Once a week I went to Grand Palais, to the building wing next to the Seine that was occupied by the German Scholars. Sometimes after the lecture I went for a walk along Champs Elysée that was very close.  Often I met Anna there at late afternoon. One thing is sure, the capital was full of thousands of noises and radiated an hectic, that was so exciting! Diverse nationalities, art and culture, architecture and much more! During my translation seminars I got friends with a German speaking Norwegian who lived in the Quartier Montmatre. From time to time we visited Sacré Cœur. I loved to pass through the arcades into the basilica and enjoying the silence of the white basilica that stand out of the city. I also liked walking along Champs de Mars and of course I climbed the Eifel Tour but I am still waiting to be invited into the restaurant Jules Verne…

The world is my home

Today as lecturer and translator, I often return to Paris, not only to meet publishers but also to catch up with friends who still live in the capital. I like to call Paris by its ancient name, Lutèce. Some of my „Copains“ moved to the country side or to more affordable residential areas, that are located in the Grande Banlieue“. Some of my friends also live abroad today and are spread all around the world.

Enriched by my experiences in France, I undertook several further stays abroad. An internship in San Francisco opened my eyes for the professional world on an international basis. Thanks to my adventure in New Zealand I could recover while admiring the nature and warm personality of the country. And then I got to know my own language and culture so well that I could teach German as a foreign language in Lisbon. I can only recommend to young people to schedule their stay abroad even before graduation and make a plan of their journey and education. Intercultural trips shape and enrich the youth. The words of Francis Bacon are absolutely true. “Travel, in the younger sort, is a part of education; in the elder, a part of experience.”

E-mail us and we get back to you shortly.